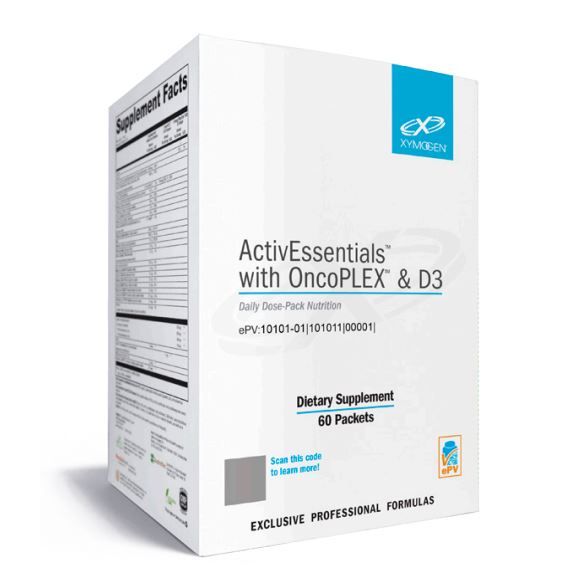 By Xymogen
60 Packets
In Stock
XYM-9
In stock
Fulfilled by Functional Medical Institute - this item will arrive in a separate shipment.

OncoPLEX™ & D3: Each capsule provides 2000 IU of vitamin D3 and 15 mg of glucoraphanin from highly concentrated broccoli seed extract, an ingredient found in XYMOGEN’s formulas OncoPLEX™ and OncoPLEX ES™. Glucoraphanin is the precursor to sulforaphane, and it possesses antioxidant activity that lasts up to 72 hours—significantly longer than the activity of vitamins C, E, or beta-carotene. Glucoraphanin also activates the transcription factor Nrf2, which induces increased synthesis of phase 2 detoxification and antioxidant enzymes. D3 is provided as cholecalciferol, identical to the form in which it is derived in the body from cholesterol and synthesized by sunlight on the skin. D3 has been shown to raise and maintain serum vitamin D and increase storage concentrations of vitamin D better than D2.*

Consume the contents of one packet daily, or as directed by your healthcare practitioner.

Do not use if packet is damaged.